Stanley's Under The Tree Again

This year we decided to put our Christmas tree on a table in the hope that Stanley wouldn't continually crawl straight up to the tree and pull the whole thing down.

Unfortunately he now has a new favourite spot - right under the Christmas tree table. Oops! 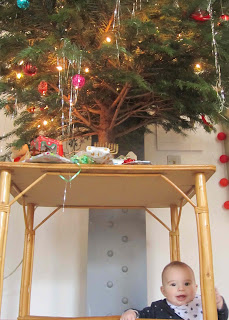 I love our tree this year. Maybe it's because it's Stanley's first Christmas, or maybe it's just because I can drink Baileys and mulled wine in excess unlike last year when I was pregnant, but I'm extra excited about the holidays. 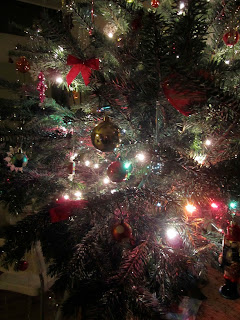 We decorated this year's tree in all our favourite baubles and added thin tinsel, (I've only ever seen this in America), which I love, as it picks up all the lights on the tree and adds an extra shimmery glow to the scene. 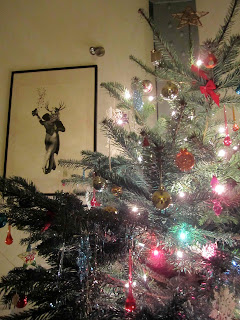 My lovely, long weekend in Paris as told in photos. I even got a night out with friends and a whole four hours shopping on my own thanks to a doting grand-pere.


Café crème in the Marais: 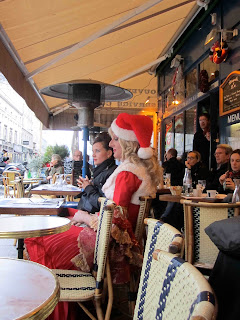 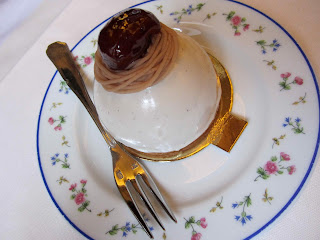 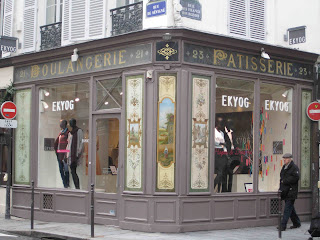 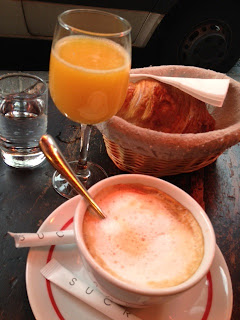 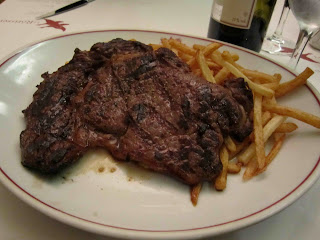 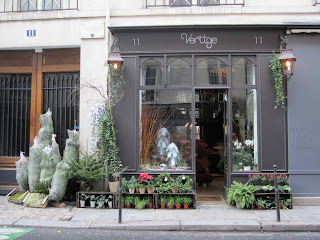 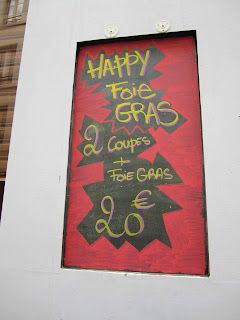 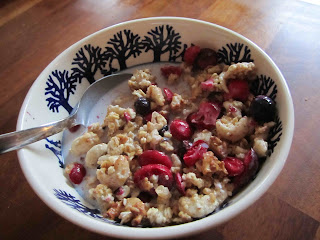 Two great things happened this morning:
1) I fired up a pot of Peet’s coffee that my Mom brought back from San Francisco.
2) I sampled a bowl of a new Jordan’s cereal - Super Berry Country Crisp
The new cereal is a blend of blueberries, cranberries and blackcurrants mixed with clusters of baked oats. It was sweet and delicious although I still felt like I was having a relatively healthy breckie and when I eat oats I always feel like I’m getting a good source of energy from them – setting me up for the day.
True to the packet’s claim the baked oat clusters stayed ‘crunchy to the last bite’ and the mix of fruit has left me feeling – dare I say it – a little festive. Still maybe that’s just my mood anyway.

Later I tried one of Jordan’s new Luxury Absolute Nut Bars – a mix of almonds, hazelnuts and pecans together with sweet wholegrain oats. Again, I felt a good energy surge from this gained from the mix of oats and large pieces of nuts. This is definitely something I’d buy for when I’m out on the run and haven’t had a chance to have breakfast which is often the case having a small baby at home.


·      *All their cereals are wholegrain and processing is kept to a


·      *Jordan’s is free from all artificial flavourings, colourings or preservatives

·      *They’re a 100% British brand
Visit the Jordan’s website: www.jordanscereals.co.uk
Anyone else tucked into a good breakfast recently? What’s for your breakfast tomorrow?
*Foodie Mom in London was sent complimentary samples of these new Jordan’s products
Posted by Jo Aspin at 09:55 No comments: 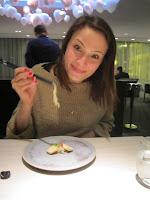 Last week I had the pleasure of visiting the brand new HKK restaurant with my blogger bezzy @HungryBecs (seen on the left with some crunchy jellyfish).

I won’t witter on about each course in detail but I do want to tell you a bit about the highlights: 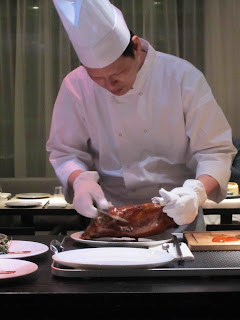 Any restaurant that uses an entire Peking duck, roasted in a special wood oven and then carved in the centre of the restaurant for each diner, is clearly trying to impress and impress they did.

We were initially a bit alarmed at the potential waste of decent duck but the manager assured us although not used anywhere else on the menu, that the rest of the duck did indeed go to a good home…basically the staff eat well at Hakkasan Group.

To simply call this a mere duck pancake would be an injustice. A ready rolled duck wrap came served on a plate, (at £95 a head it would be rude to make us roll our own), alongside what can only be described as a little slice of heaven. It was served alongside a crisp square of fatty duck skin and a dipping sauce of rich hoisin and herby sugar. Wow! 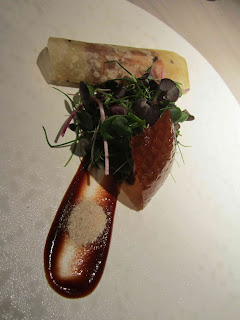 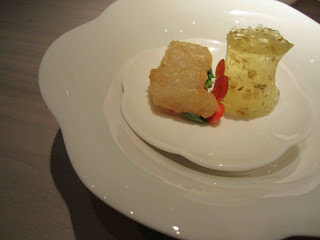 Designed as a mid-meal palate cleanser we agreed that this fried water chestnut cake was not unlike a donut – a damn tasty one though. This was served with a softly scented jelly and a fabulous Da-Hong-Pao tea. 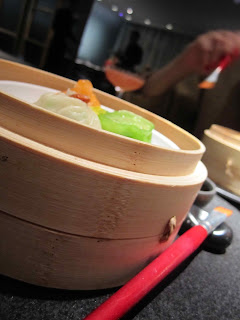 Purely for aesthetic reasons, this was my third favourite dish. HKK has really gone to town on its crockery. Beautiful white, black, grey and marbled, round, square and oblong dishes kept arriving with each course but the dim sum won hands down as it came with its own paintbrush for you to paint on your own soy sauce! As I am allergic to squid and prawns, the kitchen made me a special vegetarian medley version.

What also topped this dish was that it was paired with a mini fluorescent coloured cocktail – Bitter Fortune (Tanqueray 10, rhubarb liqueur aperol and grapefruit). 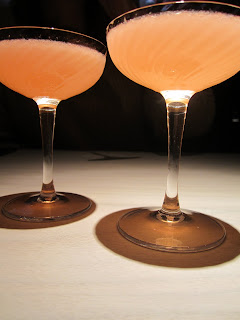 Best of luck to you HKK.