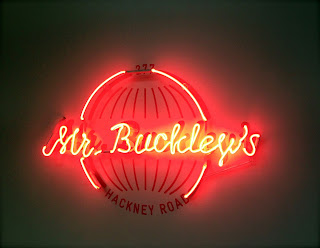 Ever since a friend tipped me off about the little cocktail bar/ restaurant that had opened up on Hackney Road and I caught a peek of the unassuming frontage and neon sign as I travelled past on the bus, I've been trying to make it down to Mr. Buckley’s. Six weeks on – yes this is how spontaneous life is post baby – I finally made it there for dinner.

Mr. Buckley’s is half way down Hackney Road, a couple of blocks down (if you’re heading into the city) from the Broadway Market and Hackney City Farm turning.

The raised restaurant is a couple of steps up from street level when you enter. There is a downstairs bar but this was closed when we visited on a Wednesday. Our waitress said it opened on Thursdays, Fridays and Saturdays when things get a bit busier. Upstairs had just a scattering of tables but most were full. 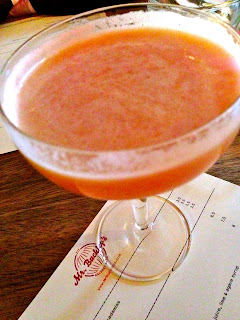 My friend arrived and we started with a couple of Rhubarb Flip cocktails – made up of cognac, rhubarb syrup, egg whites and sugar. These were DELICIOUS. They we’re thick and made largely of fresh rhubarb and had just the right amount of sweet VS booze.


Mr. Buckley’s menu is made up of small plates designed for sharing. We salivated over all the wonderful sounding dishes as we tried to choose the best combination the six things we wanted to try the most. The menu recommended three dishes per person - although in the end we settled on just five. 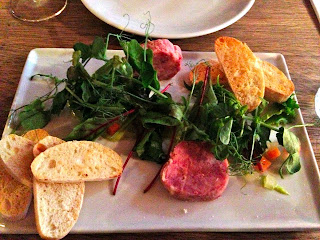 First to arrive was ham hock with homemade pickles. This was nicely presented with some greens and pickled carrots and onions scattered around the plate and what really made the dish shine was a wasabi-pea tasting green sauce that cut really well with the ham.
Small sharing-style plates have been in fashion at restaurants for some time now but last night made me wonder if these type of establishments are giving themselves a harder time by offering up a menu and saying ‘eat it all together’ if you want to.
After the ham hock, the dishes went down hill for me and I can’t help but think this was more down to the combination of flavours and dishes we chose rather than a fault with the food itself. 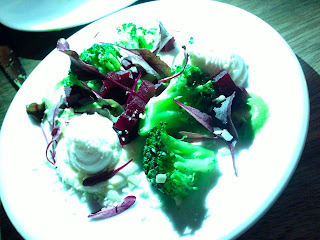 Next up was Ragstone with almond, broccoli, beetroot and ruby chard (not this florescent in the flesh the image was taken with a flash). I was expecting this dish to be more salad-based but the strong whipped Ragstone really took over and I found it overpowering compared to the rest of the elements on the plate. The broccoli was a little over-cooked and under seasoned for my taste.
We then had blue cheese polenta, sautéed wild mushrooms and truffled oil. The polenta was fabulously cooked and all the flavours married well but this was a bit of a full-on dish to follow the Ragastone and chard.
Our last two dishes to arrive were jerk crusted onglet steak, smoked paprika and mango butter with sweet potato crisps and lobster mac ‘n’ cheese.
I loved the steak dish. The Jerk seasoning was fiery and powerful and the mango butter made for a great combo.
The lobster mac ‘n’ cheese looked impressive, a neat tower of thick pasta topped with shiny bright orange roe. It tasted fine but wasn’t stand out and I couldn’t help but reminisce about the green chilli mac ‘n’ cheese I had at Rita’s in Dalston.
These guys have absolutely nailed it with the environment. The atmosphere was warm, inviting and relaxed. The lighting was just right and interiors were simple with exposed brickwork and a few tea lights dotted around. All the diners were enjoying themselves and our waitress was helpful and not at all intrusive. 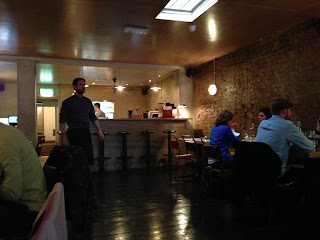 Despite some of the dishes being not 100% spot on, there’s something about Mr. Buckley’s that just makes me want to like it. The menu is varied and the dishes have clearly been imagined and put together with creative flair. I’m keen to go back and do it all again but this time with more cocktails and some lighter menu choices.
Mr Buckley’s
277 Hackney Rd, London E2 8NA
020 3664 0033
www.mrbuckleys.com